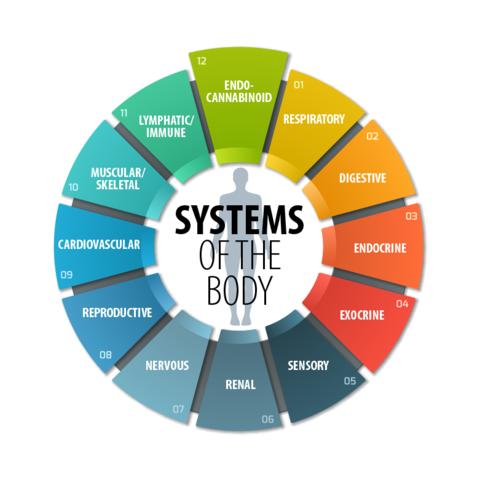 The 12th System of the Body

Discovered in the 1990’s by Israeli researcher Dr. Raphael Mechoulam, the Endocannabinoid System (ECS) is a biological system that exists in all mammals as well as other types of animals. The main purpose of the ECS is to maintain homeostasis in the body, and it plays an important role in many of the body’s other systems including the nervous system, digestive system, immune system, endocrine, respiratory system among others.

The ECS is composed of endocannabinoids (cannabinoids naturally produced in the body such as anandamide and 2-AG), enzymes that synthesize and degrade the cannabinoids, and cannabinoid receptors (primarily CB1 and CB2) found in the central and peripheral nervous systems.

From the nervous system to the musculoskeletal system, we have more cannabinoid receptors that are multi-functional regulators in the human body than any other system. Receptors send critical information to organs, cells, and the central nervous system and are vital to maintaining optimal health. No other plant, adaptogen, herb, or any other phytocompound that serves the multiple functions phytocannabinoids serve in the human body. Research has shown that introducing external phytocannabinoids like the many naturally occurring in hemp plants could be useful to support a variety of health issues.

HEMP CAN SAVE THE WORLD

Are you 21 or older? This website requires you to be 21 years of age or older. Please verify your age to view the content, or click "Exit" to leave.

Must be 21 to purchase any products. Dismiss